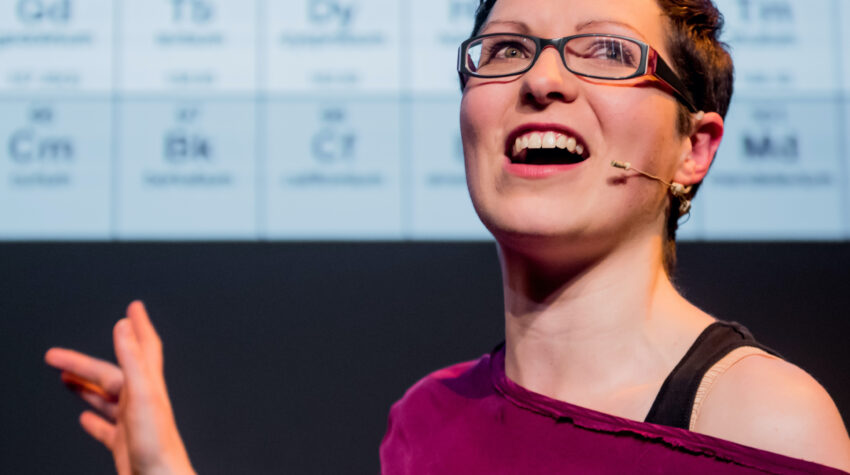 Alongside her performances as a geek songstress and comedian, Helen presents funny and factual shows for TV, radio and live in person.

On Radio 4, she co-wrote and presented the lunchtime series “Did The Victorians Ruin The World?” with her sister Dr Kat Arney, and her selection of badass physicist and inventor Hertha Ayrton for the “Great Lives” series can still be heard on iPlayer along with appearances “More Or Less” and “Infinite Monkey Cage” with Robin Ince and Brian Cox.

On Radio 3, Helen has appeared several times as a guest on In Tune, The Verb, Essential Classics and recently made her debut as live concert presenter with the BBC National Orchestra of Wales and Will Gregory Moog Ensemble in November 2021.

With Festival of the Spoken Nerd, Helen released the first series of a new podcast full of unnecessary detail in 2020, called “A Podcast Of Unnecessary Detail” and loosely based on their sell-out monthly comedy nights. Their second – even longer, and more unnecessarily detailed – series is scheduled for 2022.

Helen also hosts live events of every kind, from science-themed classical concerts with the London Philharmonic Orchestra at the Royal Festival Hall to the annual international celebration of women in science and engineering, Ada Lovelace Day – Live! and the occasional science-themed quiz for the Royal Society. She is also a regular feature at conferences, events and awards ceremonies for organisations as diverse as CERN, the United Nations, Google, British Science Association, WIRED, Institute of Physics, Royal Institution, Royal Society of Chemistry, Lloyd’s Register Foundation, Natural History Museum and Wellcome’s Genome Campus.

If you’d like to talk to Helen about your TV, radio or live event project, please get in touch.